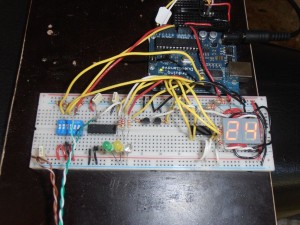 Kostas made a pretty sweet mod to his motor bike.  He’s come up with a cool way of sensing the spark via an inductive spark plug sensor.  With that information fed into his Arduino, he can calculate the RPM of the motor and display it via 7 segment displays.

Some LEDs are used to indicate shift points just like a drag car.  A Dip switch panel is used to set the shift points.

There’s a video after the break demonstrating it in action.

END_OF_DOCUMENT_TOKEN_TO_BE_REPLACED

Title says it all, we can’t get enough of people doing cool car stuff with their Raspberry Pi’s.  Each one is a little bit different and have a little different purpose.  So up is Keith’s Toyota Echo.  Keith is going green, he wants to watch the environment and his wallet.

So he’s got his Raspberry Pi, an OBD-II sensor, and a Nokia LCD.  He’s written an app in python that reads his vehicle speed and mass air flow sensor.  From that he is able to calculate his estimated fuel consumption at that specific point in time.   He’s logging this data in a SQLite database and displaying it in real-time on the LCD.   Nice job Keith.

Isn’t it fun to take stuff apart and see how things are made ?  Well Michael over at EDN likes to as well!  He’s got one of those cheap-y eBay Bluetooth OBD-II adapters and while what’s inside isn’t much of a shocker, it’s still nice to look at how things are made.

Inside is a bunch of power regulation, a CAN bus transceiver, a Microchip PIC and a ready-made bluetooth module.  Usually when you crack these cheap clones apart the soldering looks pretty shoddy, but this one looks pretty clean except for the Bluetooth module for some reason.

Check out the full teardown.

Published on: August 25, 2013 / Comments: None
All in all it took about 45 minutes to install.  I hardwired the power cables to the back of the Stereo so it will only use power while key is turned on.   Plugged the video cable in to the Video in and same with the audio.

Randy decided to trick his truck out with an embedded Raspberry Pi media center running through his in-dash DVD player. He’s hardwired everything to the truck so it powers on when the key is turned on and hid all the visible wires.  He can even charge his phone off of it.

We’ve seen people do this before, but I guess having an in-dash Pioneer DVD system makes this job a cinch!

Here’s a run down of the hardware.  He’s running OpenElec XBMC due to the fact the OpenElec distro mainly runs off of a read only ram-disk, so sudden shutdowns have less chance of corrupting the SD card.  He’s got a 10 port powered USB hub, WiFi / Bluetooth, 2x 32GB flash drives and a mini wireless keyboard and mouse touchpad.  Once booted it connects to his phone via wi-fi hotspot.  Randy estimates it cost him about $135 bucks to put this together (sans the DVD player I presume)

Randy’s got some install instructions here.

Martin got inspired by another guy doing a similar project using a Raspberry Pi and OBD-II reader on a motorcycle.  So martin got a Pi and and a USB OBD-II reader on the cheap and got it working on his car.  Seeing how the Pi is doing the heavy lifting here I can see a good start to a Car PC that monitors the vitals of your car, and possibly throwing in some multimedia and / or a touchscreen.

Martin has made his fork of the code available here and a little bit of instructions here.  The decoding is done in python so it should be pretty easy to modify or add a PyGTK library for some graphing.