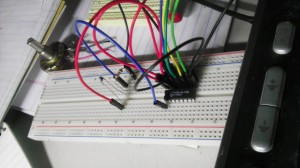 Last month Paul shared his Raspberry Pi based Temperature Monitor which he had prototyped on a breadboard.  Now he has taken it to the next level using the KiKad PCB Design tool to layout a board. The documenting of his design decisions is what makes this build interesting.

He wanted to use OSH Park which charges by the square inch.  After finding out that 3 boards would cost him $26 he was determined to get his board cost down.  Pushing the components together and shrinking the board a little helped but not by much. Swapping out the unnecessary 8 channel ADC for a 4 channel ADC freed up a little more room.  However, Paul still was not happy with the cost.  So he swapped most of the through-hole parts out with surface mount components and after a good nights sleep changed the design yet again using modern temperature sensors. After all this his total cost was $2.90 cents for 3 boards.

It just goes to show that a few hours of planning can keep your wallet fat.  See all the details here.

When prototyping with digital sensors and microcontrollers it’s common to need a logic level converter.  If you ever find yourself needing to convert between 3.3v and 5v logic levels you’ll be happy to know Tom from Magic Smoke has you covered. In his tutorial he shows you how to build your own Stripboard I2C Logic Level Converter using 4 resistors, 2 MOSFETs, a strip board, and a few jumper wires.

However, the logic level converter isn’t what got my attention with this design. I hate prototyping on perfboards and stripboards. I’d much rather use DipTrace to capture my schematic and layout a PCB.  Though, Tom may have changed my opinion about stripboards by introducing me to this online Stripboard Schematic Capture and Layout (alpha) editor.

We also stumbled across a downloadable Stripboard Design Editor which comes pre-loaded with your basic discrete components such as resistors, caps, transistors,  and generic ICs. You can also create your own custom IC parts. It’s lacking some other common parts such as headers,  jacks, and crystals.

Published on: August 30, 2013 / Comments: None
[su_quote]…multiple parts simultaneously straight from the Octopart front page. Just copy the list of parts from your spreadsheet or document, and paste straight into the box. [/su_quote]For years engineers and hobbyist have been using Octopart.com to source electronic parts. Until now you have only been able to search for one part at a time which was fine for keeping your cost low and finding alternative sources for hard to find components. But since the beginning their users have been demanding more.

We had to give it a test so we found an old BOM (Bill of Materials) we had lying around and copied a column of manufacturer part numbers (MPN) into the search box.  After poking around the results page for a few minutes we quickly came up with a wish list of features.  Sadly, we could not find a way to save your BOM.  Also, you can search by distributor part numbers to build your list, but if you search by MPN there is no way to easily update the BOM with your preferred distributor.

On the 20 some-odd remotes I have around the house, I know there are a bunch of buttons on some of them that don’t do anything for my model of whatever it controls.  Badr noticed the same thing on his satellite receiver.  So he decided to give those extra buttons something to control.

Armed with a little IR transmission know-how, a 16f84a, a transistor array and some relays he added support for controlling his some lights and a fan.

He’s got a schematic and source code up here.

Felix has put together the ‘definitive tutorial’ on making solder paste stencils out of soda cans, who am I to argue with that ?  Looking at his previous attempts to perfect the process I can buy that.

The soda can appears to be just the right thickness (and price) for a sharp stable stencil.  Felix uses the toner transfer method to etch the holes in the soda can using readily available chemicals.  If you’ve ever etched a circut board it’s a similar process.

The write-up is here.

If you make it that far, you’ll want to check out Felix’s solution for a cheap manual pick and place that he put together for $20.  Just add a home made reflow oven or hot plate and you’re making your own surface mount boards in no time.

I love how this article starts out, the age-old saying about RF and analog being taboo… so true!  Anyhoo, Colin takes you on a quick rundown of antenna basics, focusing on tuning PCB antennas.  This is one of those articles you see AFTER you need it, personally I totally could have used this months ago.  So we’ve all seen these PCB antennas, those little squiggly lines on your board that do the voodoo RF magic, but what do you do when you need to tune it ?  Well start by reading this article.

With the recent boom of cheap SDR’s flooding the market, more people are getting back into RF design.  Although I wouldn’t recommend using a fixed-tune antenna for a SDR, the theory by its self is worth the read.  Of course the biggest hurdle here for a DIY’er is going to be having access to a spectrum analyzer.