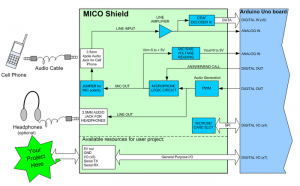 Mico is an Arduino shield that talks to your cell phone.  Literally.  It connects via the audio jack on your cell phone, and has the ability to read DTMF tones for control.  It also can answer the phone by using the same technique your old wired headset does.

Some of the applications the mico guys have put together are it answering the phone and reading out sensor data.  It has a audio playback library so with some crafty recordings you can do cool things.  They even have a demo application of the shield talking to Siri on IOS in order to do more functions like send text messages.

Interesting concept, I think it’s still missing something like a little more control but I give them props for being different.

The project currently has a kickstarter going to launch a large production run, there’s also source over at github.