Halloween isn’t over yet, there is still time to make something cool for Halloween.  Here’s a few to inspire you.

First up is Halloween Prank.  While not a completed project, this is a good base for Arduino powered scare tactics!  The build uses an Arduino, an Ultrasonic distance sensor, and a servo.  By detecting ‘someone coming to your door’ possibly, the servo is triggered.  In Jacob’s build the plan is to drop a bunch of spiders on people walking up.  That sounds like fun.  You could also make it actuate something to jump out at your unsuspecting victims.

Source code for Halloween Prank is available here on GitHub.  There are more pictures and a test video on Jacob’s site.

END_OF_DOCUMENT_TOKEN_TO_BE_REPLACED

Everyone usually agrees that home made gifts are usually more heart felt.  So instead of buying a gift,  Christian decided to make one for a friend.  Not too far from a musical birthday card, the Birthday Box, will present a message to the receiver on an LCD screen, and sing the song happy birthday.

The Happy Birthday Box uses a piezo buzzer for a speaker generated by an Arduino.  The text message is displayed on a standard 16×2 LCD screen, and powered by a battery pack.  There is a small roller switch as well, I assume everything turns on / off when you open and close the box but it wasn’t specifically stated as the functionality.

Keep this project bookmarked, and add a few LEDs for that valentine of yours.

Check out a quick video after the break;  Source code and more pictures on Christian’s blog.

END_OF_DOCUMENT_TOKEN_TO_BE_REPLACED 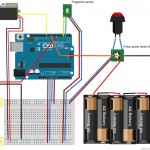 Taking a ploy from the upcoming TouchID feature the new iPhone will have, Grant was inspired to make this really neat toy box for his son’s toy car collection.

Check out the source code and other details on Grant’s site.

Check out the video after the break.

END_OF_DOCUMENT_TOKEN_TO_BE_REPLACED

Halloween is a great time for makers, we get to make all kinds of cool costumes and spooky things.  Sometimes we get to play with fire.  Well at least Chris Lee does.  This flaming pumpkin is enough to keep them pesky kids from toilet-papering your house, or catching it on fire after they do.

The pumpkin is triggered by an Android phone, talking to a RFU-328 radio and Arduino.  The Arduino triggers 2 relays, 1 to activate a furnace igniter, the other activates a solenoid that releases the flow of gas.   The spray mechanism comes from an AirWick room spray and is filled with butane.

Chris made a comment about maybe converting this to shoot silly string out during actual Halloween, either way it’s a cool project.

Stumbled on this awesome project that uses 2 old hard drives platters as rotary encoders / jog wheels.  Obviously for the purpose of DJing!  I love it when people reuse hardware that was originally intended for another purpose.

The build uses an Arduino Mega 2560 as its main processor.  RGB LED’s for the VUmeters, some slider pots for fading, and some extra buttons and knobs for MIDI events.  On the PC software side, the author is using mixxx for the MIDI mapping.

Check out the video after the break.  More pictures in the gallery.  Source code here on GitHub. More documentation here.

END_OF_DOCUMENT_TOKEN_TO_BE_REPLACED

It’s the Arduino TRE.  Not unlike the previously announced Arduino YUN, a dual processor design.  The board is a Leonardo style Arduino (ATMega32u4) paired up with the same workings that make up the beagle bone black (AM335x Sitara).  Which gives you an environment suited for embedded Linux on the Sitara side, and Arduino (on the Arduino side).

In my opinion these boards create market confusion, especially to newbies.  Everyone says ‘we are Arduino compatible’ which means you can write code somewhat like an Arduino, or it has a footprint for an Arduino shield.  But what they don’t tell you is you can’t run Arduino code, or there is no library to support that Arduino shield.  What used to make the Arduino great was the fact there was tons of shields and code out there you could run.  Now that isn’t the case.  With all the new gross hybrids and incarnations you can’t simply get some code that used to work — to work.  It requires some interpretation and porting.

Don’t get me wrong, I’m all for cheap, powerful hardware.  But I feel that more hardware like this starts to separate the people who write code, and the people who use code.  Something like the TRE will be an awesome processor for your 3D Printer and tons of people will use it.  That’s the key word, use it.  They will download pre-compiled binary images and  eventually figure out how to get code on the eMMC and the Arduino at the same time etc.  But then when there is a bug they will rely on others to fix it or enhance it because the environment becomes more intimidating and there are less examples on how to do things.   That’s just my take.

With the advances of shrinking technology it’s becoming more and more easier to roll your own every day items.  Ever thought of making your own watch ?  Sure you have, it was probably going to turn out larger than you anticipated too huh?   How’s 1.5mm thick sound ?   Sounds pretty good to me too.  Zak has a really awesome writeup of him rolling his own watch.

Power consumption numbers are decent too.  6ua in sleep mode, and 10ma with normal on.  That means depending on how much time you spend with the screen on will dictate how long your charge will last.  This puts you anywhere between 15 hours and 3 years.  With those sort of numbers and a modest use of your watch you should be able to get 15-30 days out of a single charge.

The Schematic and source code are available on Zak’s web site, a long with more photos of the build.  Enjoy a video and a few more pics after the break.