I know this awesome project is a few weeks old but I’m going to use the fact that Rupert recently posted an update as my excuse to share it on hackalizer. As the title implies the V-USB Media Volume Control project is using V-USB. V-USB is software which makes it possible to add low-speed USB to almost any AVR microcontroller without any additional hardware. 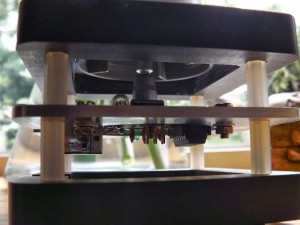 From selecting the perfect rotary encoder to designing and etching his own PCB and eventually making a custom enclosure, this project shows is all. Rupert explains some of the minor but important differences of the rotary encoder such as the number of detents and amount of force required to turn the knob and press the button.  He also shares an important lesson on load capacitance with regards to the crystal on his home-brew board. Check out the build video after the break.

END_OF_DOCUMENT_TOKEN_TO_BE_REPLACED

Matseng put together a nifty tool that can quickly identify both the transistor type, and the correct pin out.  We posted a method earlier on how to determine these characteristics manually, but where’s the fun in that ?  Part of his self set goal of making a Project A Week, this is his 22nd week project.

His design uses a PIC16LF1503 microcontroller and is powered by a CR2032 coin cell battery.  It uses LEDs and silk-screen markings to show you the output.  On the PCB there are holes for common transistor configurations such as to-92, to-18 and to-220 that you can insert to be identified.  The part is given a voltage in different configurations and read back using the PIC’s ADC.

Source code and schematic are provided on his post to the Dangerous Prototype’s forums.

Not happy with your cable modem performance?  Crack it open and fix it!  That’s what forum user Xymox did.  After cracking open his DPC3012 he noticed there were a few spots on the main PCB that were not populated with parts.  The theory is they saved on budget and didn’t populate all the parts.

Xymox stuffed a huge amount of tantalum capacitors all along the power rail.  He also added large capacitor on the power supply.  It appears that the modem also runs pretty hot so he addressed the temperature issues by adding Arctic Silver to the heat sink and a fan.  After the modifications are all done to the modem, he measured a 1000:1 reduction in power noise.

Having a spare unmodified modem to compare against, Xymox states a gain of 1db to the signal to noise ratio.  The upstream power decreased by 1.5db meaning the modem has to try less as hard to maintain a good signal.  There is also a side by side plot of ping times captured over a week.  The average ping time has improved as well. 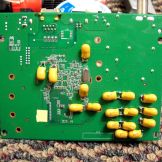 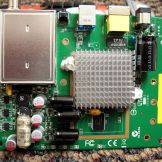 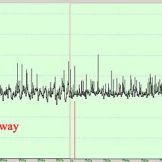 Published on: September 3, 2013 / Comments: 1
The project it currently in its early stage, but fully functional and could be used to play multiplayer games over the Internet.
The sheer fact that people seem to spend a great deal of time modernizing vintage consoles tells you one thing, that retro gaming is awesome.  The SNESoIP project is not a full solution for playing SNES games (on a real console I might add, not an emulator) over the internet, but it is a start.

The concept here is to basically move the controllers to a packet format that can be manipulated over networking.  On the hardware side, it’s basically a box with an ethernet cable and a SNES controller jack.  It looks like the processor is an ATmega8 with an enc28j60 for ethernet (which was mentioned earlier as a cheap Arduino solution).

The project is open source, has source code, schematic, and pcb files here on github.

When prototyping with digital sensors and microcontrollers it’s common to need a logic level converter.  If you ever find yourself needing to convert between 3.3v and 5v logic levels you’ll be happy to know Tom from Magic Smoke has you covered. In his tutorial he shows you how to build your own Stripboard I2C Logic Level Converter using 4 resistors, 2 MOSFETs, a strip board, and a few jumper wires.

However, the logic level converter isn’t what got my attention with this design. I hate prototyping on perfboards and stripboards. I’d much rather use DipTrace to capture my schematic and layout a PCB.  Though, Tom may have changed my opinion about stripboards by introducing me to this online Stripboard Schematic Capture and Layout (alpha) editor.

We also stumbled across a downloadable Stripboard Design Editor which comes pre-loaded with your basic discrete components such as resistors, caps, transistors,  and generic ICs. You can also create your own custom IC parts. It’s lacking some other common parts such as headers,  jacks, and crystals.

Published on: August 30, 2013 / Comments: None
[su_quote]…multiple parts simultaneously straight from the Octopart front page. Just copy the list of parts from your spreadsheet or document, and paste straight into the box. [/su_quote]For years engineers and hobbyist have been using Octopart.com to source electronic parts. Until now you have only been able to search for one part at a time which was fine for keeping your cost low and finding alternative sources for hard to find components. But since the beginning their users have been demanding more.

We had to give it a test so we found an old BOM (Bill of Materials) we had lying around and copied a column of manufacturer part numbers (MPN) into the search box.  After poking around the results page for a few minutes we quickly came up with a wish list of features.  Sadly, we could not find a way to save your BOM.  Also, you can search by distributor part numbers to build your list, but if you search by MPN there is no way to easily update the BOM with your preferred distributor.

Project sentry gun is an open source project for people who like to make sentry guns.  From the looks of it the most popular flavor is for paintball guns, but you could adapt this design to anything — as all the basics are there.  The project is powered by an Arduino or a custom Sentry controller, some servos, webcam, and some raw materials.

The site has everything you need, part’s list / BOM, places to order the parts, schematics and source code.  They also have the design for their standalone controller.  You can even buy a complete setup.

Cool project, looks like it could be a lot of fun.