Halloween isn’t over yet, there is still time to make something cool for Halloween.  Here’s a few to inspire you.

First up is Halloween Prank.  While not a completed project, this is a good base for Arduino powered scare tactics!  The build uses an Arduino, an Ultrasonic distance sensor, and a servo.  By detecting ‘someone coming to your door’ possibly, the servo is triggered.  In Jacob’s build the plan is to drop a bunch of spiders on people walking up.  That sounds like fun.  You could also make it actuate something to jump out at your unsuspecting victims.

Source code for Halloween Prank is available here on GitHub.  There are more pictures and a test video on Jacob’s site. 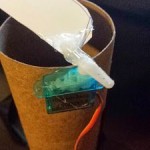 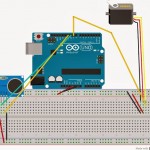 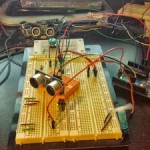 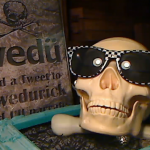 Next up is Yorick, the talking skull.  This is a little interactive bit.  It’s a Raspberry Pi powered skull that will read your twitter messages over a live video feed.  A Raspberry Pi uses Python ti scan twitter messages sent to Yorick.  The tweet’s then go through Google Translate to produce a text to speech file that is played on a USB powered speaker.   Then an Arduino maps the audio wave to move a servo that actuates the skull’s jaw and makes it look like he is talking.  All in all amazing build.

It looks like Matt Heilman is in the Halloween spirit with this next hack.  Here’s his video on hacking a solar light to make a solar powered pumpkin light.   Better than burning your grass with candles, and environmentally friendly!

As an added bonus, here is a great hack from last year.  Pumpktris – the Tetris pumpkin.  I won’t get into all the details of this one (you can check out the instructable) but who doesn’t want to play tetris on their pumpkin ?